The true history has been written in the lives of individuals and families transformed by a Spirit-anointed proclamation of the gospel of Jesus Christ – and this is our future, as well – transforming lives and impacting our region through the power of Jesus Christ.

We Build The Future

Bob and Beverly (Holmes) Potter of Tulsa, Oklahoma are the founders of Columbus First Assembly of God. A graduate of Central Bible Institute in Springfield, Missouri, Bob said, “We came to Indiana after much prayer feeling the need there was great. We came with no promise of help. We opened services on Sunday night, June 22, 1952, with four adults present. We had our first Sunday School session on July 27, 1952, with ten present. Our location was in an old house in the 1200 block of Jackson Street.”

The youth and young adults of the South Side Assembly of God (now First Assembly) in Bloomington, Indiana came to Columbus on Friday evenings to support the Potters in holding street services on the northside of the courthouse. After songs, testimonies, and a brief message, Pastor Potter invited the listeners to the house on Jackson Street for refreshments and fellowship.

On the corner of 10th and Iowa in 1954, Pastor Potter and the men of the church built a rectangular block building with an apartment in the back. Soldiers from Camp Atterbury helped with the construction. For about ten years, the church met in this building.

Wesley Holmes became pastor in 1958, and in 1965, under his leadership, using Indiana field stone, the congregation built a new church next to the old one. It is now used as the youth and Christian education facility.

During the time Truman Smith was pastor (1978-91), the church purchased property to the east (1979), then the north and northeast (1986), which facilitated the growth of CFA.

Charles Gillihan (1991-2002) led the church in constructing the current sanctuary and dedicated it on May 18, 1997. In addition to the sanctuary seating approximately 650, there were additional restrooms, a library, pastor’s study, church secretary’s office, large foyer, and enclosed flower garden costing nearly one million dollars.

On June 7, 2008, CFA faced it’s greatest challenge yet. The church was completely flooded out of it’s worship center following a flood that greatly impacted Columbus, Indiana. The church basement was completely filled with flood waters, and 99% of all contents destroyed. Just about every square inch of the entire church facility went under water, except the church balcony, but even the sound system and other electronic items in the balcony were damaged due to moisture! The loss was valued at close to one million dollars, but the congregation watched God perform miracle after miracle throughout the year-long rebuilding journey. Due to the generosity of Memorial Baptist Church on nearby 7th Street, the congregation was still able to meet for services, as MBC opened their facilities for CFA’s use on Sunday afternoons and Tuesday evenings.

On September 14, 2008, Pastor Donald Andreasen (2003-2011) and CFA’s congregation dedicated the sanctuary wing of the church facilities, while the rest of the building continued to be under construction and renovation. On June 7, 2009, exactly one year after the devastating flood, the church dedicated the entire worship center facilities in a huge dedication service and open house celebration.

In July of 2011, Pastor Andreasen felt a stirring of the Holy Spirit and accepted a position in Illinois.  In November of 2011, Pastor Rick Glowacki began ministry at Columbus First Assembly.  He and his wife Sheri, and their son, David, moved from Kansas, where they had previously served in ministry for over 20 years. 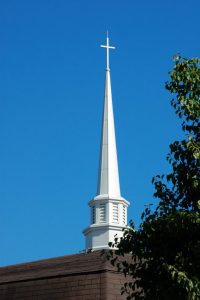 Acquisitions of property and building projects are important, and the flood of 2008 certainly will go down in the history books, but these events are not the real history of CFA. The true history has been written in the lives of individuals and families transformed by a Spirit-anointed proclamation of the gospel of Jesus Christ – and this is our future, as well – transforming lives and impacting our region through the power of Jesus Christ.

Through the years, God has given us the following men as our pastors:

Join Us Every Sunday:

Whether you’re broken, happy, hurt, lonely, hopeful, hopeless, lost, joyful, questioning, or full of faith and you are looking for a home, there’s a place for you at Columbus First Assembly (CFA!)